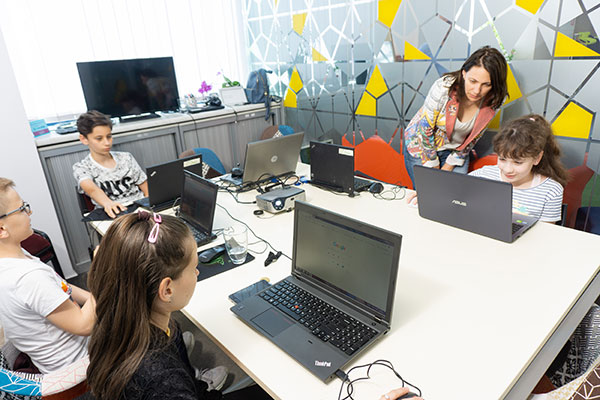 The basics of programming and technical creativity

Creative programming for beginners. You can spend time usefully with IT Junior, participating in programming courses for children, beginners and advanced, with professional trainers. We place great emphasis on practical and interactive applications!

Programming languages ​​help you create your own interactive stories, animations, games, and music. You work with children’s programming languages, Code and Scratch, where different elements (images, sound effects, photos, and others) are combined in such a way as to create the animated story you want.

What is Scratch? It is a programming language made especially for children, created by a group of researchers from the Massachusetts Institute of Technology, the most important educational institution in the world, being a very useful tool in understanding the logic behind computer programs.

In short, you learn programming concepts by making your own games and stories!

create your own games and animations with Code and Scratch languages

C ++ PROGRAMMING for beginners and advanced

Programming from scratch to the essence with the C ++ programming language, both for passion and for performance-participation in Olympics and computer competitions with a teaching method adapted to the needs of each child.

to use the C ++ programming language

to experiment with C ++ programming principles and algorithms

to combine concepts of mathematics with those of programming

PYTHON PROGRAMMING for beginners and advanced

Children’s programming courses help you program your own applications from scratch and provide the practice you need to master new powerful programming skills. This course gives you the digital tools you need to become an expert in the field.

Full of fun examples and colorful graphics, this is the course you will enjoy as you develop one of the top skills of the 21st century! Python is an excellent first programming language for beginners, but it is powerful enough to be used in most companies in the IT industry.

This course is designed to be easy for beginners to understand, with code examples that young children and teenagers can use.

graphical programming with Turtle in Python

Frequency
Classroom in Bucharest, Online or 1 to 1
1 meeting/week, 90 minute